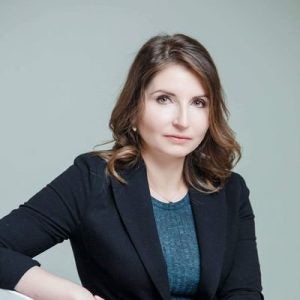 Maria Snegovaya (PhD, Columbia University) is a Postdoctoral Fellow in Georgetown University’s Walsh School of Foreign Service at the Center for Eurasian, Russian, and East European Studies, a Fellow at the Illiberalism Studies Program at George Washington University, and an Adjunct Senior Fellow at the CNAS. The key focus of her research is democratic backsliding and re-autocratization in postcommunist Europe and the tactics used by Russian actors and proxies who circulate disinformation to exploit these dynamics in the region. She also studies Russia’s domestic and foreign policy. Her research results and analysis have appeared in policy and peer-reviewed journals, including West European Politics, Party Politics, Journal of Democracy, Post-Soviet Affairs, and the Washington Post‘s political science blog the Monkey Cage. Her research has been referenced in publications such as the New York Times, Bloomberg, the Economist, and Foreign Policy. Throughout her career she has collaborated with multiple U.S. research centers and think tanks.

Please tell us a little about your background:

I am originally from Russia and completed my PhD in Political Science at Columbia University. I am particularly interested in the issue of democratic erosion that has become pervasive across many world regions in the last decade. I am puzzled why nations, especially those with experiences of autocracies, voluntarily abandon democratic freedoms. To understand this dynamic, I explore trends, such as the rise of populism, in Central and Eastern Europe and analyze how and why they are paralleled in other regions. My overall conclusion is that illiberal actors gain support during periods of crisis of democratic representation: they fill in the gap by offering policies that are not offered by mainstream political actors. I also focus on Russia’s domestic and foreign policy. Throughout my career, I have tried to ensure that my academic research informs policy decisions, especially in light of the challenges that Russia’s foreign policy has created for international security in the last decade.

This Fall semester I am teaching a class on US-Russia foreign policies. This topic has become all the more relevant with the outbreak of Russia’s war in Ukraine this February.  The war has tremendous implications for the international security and stability of the liberal international order. It is the main issue in US Russia relations at the moment, as Russian authorities view this war as going beyond regional boundaries and representing Russia’s struggle against the West. This class tries to understand how war of this scale could become possible in the 21st century, and how the dynamic of the US-Russia relationship in the last century affected it.

What are you looking forward to in teaching and being part of the Georgetown community?

I am deeply grateful for an opportunity to become a part of the Georgetown community. It offers fantastic resources for research and networking. While staying with Georgetown, I am hoping to finish several projects that I am working on right now, as well as teach several new classes to the students. I am really looking forward to contribute to your respected institution to the best of my capacity!