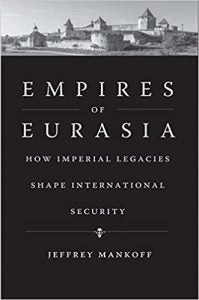 How the collapse of empires helps explain the efforts of China, Iran, Russia, and Turkey to challenge the international order

“This is a must read to understand the backstory of conflicts from Crimea to Xinjiang.”—Fiona Hill, author of There Is Nothing for You Here

Eurasia’s major powers—China, Iran, Russia, and Turkey—increasingly intervene across their borders while seeking to pull their smaller neighbors more firmly into their respective orbits. While analysts have focused on the role of leaders such as Vladimir Putin and Recep Tayyip Erdoğan in explaining this drive to dominate neighbors and pull away from the Western-dominated international system, they have paid less attention to the role of imperial legacies. Jeffrey Mankoff argues that what unites these contemporary Eurasian powers is their status as heirs to vast terrestrial empires, whose collapse left all four states deeply entangled with the lands and peoples along their peripheries but outside their formal borders. Today, they have all found new opportunities to project power within and beyond their borders in patterns shaped by their respective imperial pasts. (Yale Press)