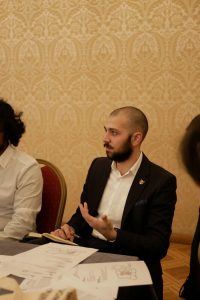 Mikael comes from Moscow, Russia. He did his undergraduate degrees in International Relations and Public Affairs at the University of New York in Prague and the State University of New York. During his undergraduate years, he completed two exchange programs at Suffolk University in Boston and the Catholic University of America in Washington, D.C. Despite living in Europe and now in the United States, he has always maintained proximity to Russian domestic affairs and plans to return to Russia in the future. His research interests include post-communist economic and political transitions and Russian foreign policy.